In the latest episode of the second season of The Creative Lives, we get a chance to take an in depth look at artist Jeremy Fish. Here’s what TCL had to say about the latest edition:

“Inspired by his traveling salesman uncle, Jeremy Fish is drawn to the road like a river to the sea. On this three week journey we follow Jeremy and his trusted van Big Mike up the Pacific Northwest on the tail end of his 2010 summer tour that took him to galleries across Europe and the Southeast United States. Jeremy created unique paintings for each city on the tour, inspired by their heritage, and tells us about his own upbring and love of art as we travel through Portland Oregon and Seattle Washington.”

The Creative Lives are back at it again with another artist featured episode. This time around it features the one and only Richard Colman.

“Relentless and driven, Richard Colman creates work that questions the role of power. Perhaps this stems from his early years writing graffiti in Maryland, where his EVER moniker became ubiquitous in the streets. After his friend Roger Gastman asked him for paintings for a book launch he was doing, Richard created his first studio work and was very well received, starting Richard on a lifelong journey to create work that meets his own high expectations. He pushes himself constantly and what the world gains is a incredibly detailed and ever changing body of work that continues to shift and invent due to the artist’s restless nature. In this episode we follow Richard as he creates two knock-out installations at New Image Art in Los Angeles, and Guerrero Gallery in San Francisco.” In its second season, The Creative Lives has release a mini-documentary about the life and times of artist Cleon Peterson. TCL takes a look at Peterson’s extensive and exceptional career and interviews the artist himself as well as many important people in his development. This is what TCL had to say about the video:

“Cleon Peterson‘s cruel images of violence assault our senses, yet his goal is not to shock but to dissuade the negative world he sees unfurling around him. War, rape, distrust and dishonor are depicted in classical landscapes framed as if an 18th century oil. Raised in Seattle, Cleon’s mother, a former ballerina, pushed his talent to great lengths, encouraging Cleon to get his GED at age 14 and start attending art college. Brilliant but addicted, Cleon struggled, eventually ending up in a criminally ordered asylum, where he got clean and started to define his unique vision.”

Some more image previews and video and some more after the jump. 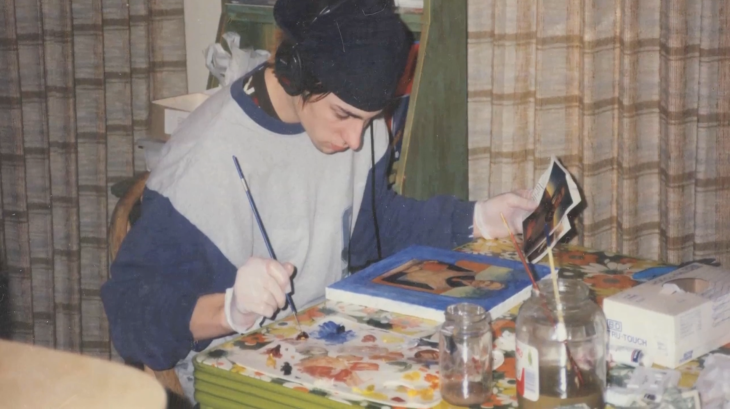